Biotech venture funding metrics continue at historic highs, highlighting that the robust financing environment in the public markets continues to fuel the private markets as well.

Last week the quarterly Thomson Reuters data on venture capital funding came out via the National Venture Capital Association (NVCA); beyond the top-line data, there are a few interesting takeaways, especially when viewed in the context of historical trends. Here are six data-driven observations and the supporting charts, derived from the 1Q 2015 PricewaterhouseCoopers/NVCA MoneyTree™ Report.

Overall biotech venture funding levels are amongst the strongest in the sector’s history. As the chart below reveals, three of the top funding quarters in a decade occurred in the last year (far right side). To smooth out the quarterly ups and downs, I’ve plotted the 3Q-rolling average to get a better sense of the trends. Interestingly though, while absolute funding levels are up, the number of biotech companies getting venture financing has largely been flat, running at ~120 companies per quarter. Elevated funding levels don’t appear to be driving increases in biotech formation. The combination implies that the average financing size has gone up, now 50% above the 10-year average (just shy of $14M per financing).

Later rounds of financing have driven the uptick in the overall venture funding numbers, up 60% from its 3Q-rolling average. My guesstimate is that nearly all of this run-up in funding is due to “crossover” activity from traditionally buyside investors joining private company rounds, or roughly ~$500M per quarter for the past year. Unfortunately, it’s very difficult to track the specifics to dissect this topic with any accuracy. The other source of the uptick could be new venture funds coming online, but capital is rarely put to work that quickly out of the gate (i.e., 15-20% in the first year of the fund’s life is common), so the near-term quarterly impact from new venture funds is likely to be minimal.

The surge in biotech venture funding has brought an increase in quarterly “volatility” relative to historical trends. The chart below highlights a decade of quarterly volatility, as measured via an eight-quarter rolling standard deviation normalized to 2010. The significant spike in recent quarters reflects two things: (a) lumpy fund flows caused by “mega-rounds”, like the $450M raise at Moderna, that were less common a few years ago; (b) the fickle but significant fund flows from crossover investors in later rounds of financing, as noted above. For instance, in 1Q 2014, after the Gilead HCV pricing issue spooked the public markets, quarterly venture funding fell below its decadal average as crossover investors closed their wallets (see drop in overall and later rounds of financing above). Volatility is to be expected if crossovers remain engaged in this part of the market, so we should anticipate more ups and downs in quarterly venture funding numbers going forward. First-time venture financings – those backing new biotech startups – continue to be constrained. The number of new startups per quarter has largely been flat for the past five years, hovering between 20-30 new companies, as I’ve discussed in the past (here, here); as expected, the range-bound trend held up in 1Q 2015. The drop in the pace of startup creation between 2008-2010, which was in part a function of the collapsing number of active venture firms (here), has yet to rebound and appears to be structural.

However, the 1Q 2015 data did show a huge increase in first financing funding levels; in fact, it recorded over $400M in fund flows, the biggest ever quarter. I’m not one to focus on quarterly ups and downs given the volatility mentioned above, as this could just be noise in the lumpy data, but this is over a 2x increase above the norm. Unlike the uptick in later rounds of funding, this additional $200M above historic averages could be due to new venture funds coming online.

These data also imply a shorter than expected “venture financing lifecycle” in biotech. Over time, about 25% of any given quarters’ financings are for newly-backed biotech startups (“first financings”); further, the overall number of quarterly biotech financings has been relatively constant at ~120 companies. Since these numbers are fairly constant over long time intervals, this implies that the typically life of a venture-backed biotech (at least with regard to their venture financing needs) must be about ~4 years. These data suggest that within that period of time, most biotechs must seal their fate – either via death (shutting down) or by no longer needing venture funding (e.g., IPO, M&A, or non-dilutive deal-making self-sufficiency). Otherwise, if it took a longer time on average to reach that fate, we’d see an increasing pool of biotech companies getting venture financed over time, which we largely haven’t over the past decade. This 4-year lifetime is far shorter than commonly perception and warrants further analysis.

Are we in a venture funding bubble? These data certainly can’t answer that. We’ve obviously had a few large quarters for fund flows into venture-backed biotech, but in the vein of “we-aren’t-as-bubbly” as other sectors, a comparison of biotech vs all other venture capital fund flows suggests we aren’t out ahead of the pack. Tech venture financing levels have witnessed massive increases in recent quarters (i.e., the 3Q-rolling average is up ~100% in two years), making the ~30% upswing in biotech venture look modest and decidedly unbubblicious. 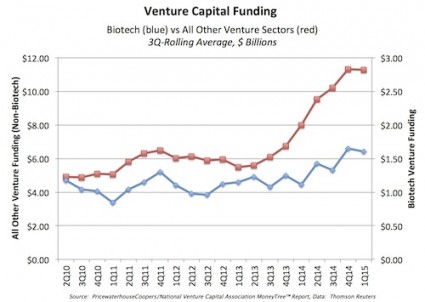 It will be interesting to watch the quarterly trends throughout 2015: Will the aggregate biotech funding levels continue? Will the 1Q surge in new startup funding revert to the mean, or will we see more first-time financings and greater new venture formation? Will later rounds of financing continue to attract crossover interest? Will funding numbers increase further or stabilize with less volatility as recent VC fundraising comes online