Everyone wants to invest in a Unicorn, or so it seems. These are the investments that legendary track records are made of. But truth be told, Unicorns don’t always lead to the biggest pots of gold at the end of the investment rainbow. David Coats at Correlation Ventures recently posted a great piece that frames up the topic nicely: “Unicorns are Overrated. Triple Crowns are Better.”

David came up with the latter term – Triple Crowns – to focus attention on deals that make great returns.  Triple Crowns have three characteristics: realized investment multiples of at least 10x, realized IRRs of at least 100%, where VC’s invested a meaningful amount of capital (>$1M).  Like Unicorns, these deals are rare, but Triple Crowns even more so – less than 1.4% of all investments that have been made and exited over the past decade.

While Unicorns get lots of media attention for their astronomical paper valuations, it’s the realizations of Triple Crowns that we really seek as investors. David states this very clearly in the post:

Ultimately the interim, or even ultimate, valuation of venture-funded companies is not what matters. It is the cash-on-cash multiples and IRRs that we realize on our investments.

David’s blog – and a great Venn Diagram – is based on 17,432 venture financings in the Correlation Ventures database that went into companies which have “exited” from 2006 through 1Q 2016. For purposes of this analysis, Correlation defined a Unicorn as a company that achieved at least a $1B valuation either privately or immediately after lock-up from an IPO (i.e., 6-9 months post IPO median valuation). There were 247 Triple Crowns and 459 Unicorns, with only 96 overlapping as both.  In fact, David highlighted the surprising lack of overlap: more than 70% of all Triple Crowns weren’t Unicorns (meaning those deals drove great returns at more modest valuations), and more than 80% of the Unicorns didn’t deliver Triple Crown-like returns despite their >$1B valuations.

But these data cover all of the sectors of venture capital, rather than just the 11% that went into BioPharma.  David was kind enough to share that data with me. Here’s the run down:

There were 1915 BioPharma financings into companies that have exited from 2006 through 1Q 2016.  Of these, there were 43 Triple Crowns and 54 Unicorns, with only 8 deals were overlapping the two groups. 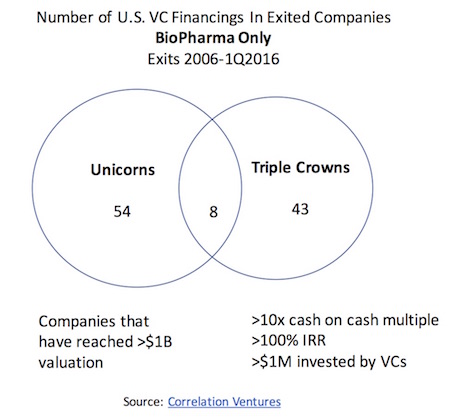 To get a sense of the relative frequency of these events, the charts below capture both the share of each sector’s investments that end up as Unicorns and Triple Crowns (left), as well as the share of each exit type that came from BioPharma deals (right). As David concluded in his original post – which I can’t state any better:

My hope is that a re-focus on realized returns by financing round will help us return to more capital- efficient investing and management. Shouldn’t we celebrate the entrepreneurs and VCs, for example, in an investment that generates a 15X return on a $200M exit more than we do an investment in a Unicorn that generates a 2X return?

Thanks to David and the team at Correlation Ventures for sharing these data.